Our nursery focuses on perennials, shrubs, trees, different types of soils (picked up and/or delivered), and bulk dyed hardwood mulches. We screen our soil here on the property and grind and dye our mulch here too. We bag our own grass seed and have lawn and shrub fertilizer made for us then shipped here according to our own formulas.

The nursery was started in 1947 and has evolved into a nursery that has moved more towards the horticultural end of the spectrum. We no longer spray insecticides or fungicides but keep our plants happy with proper spacing, feeding, repotting, watering, etc. We try to sell plants that will stand the test of time in our climate with little babysitting other than the first year watering requirements. If we don't have luck with a species, we just stop selling it because we figure that if we don't have luck with it, you might not either, and we would like to prevent you from experiencing frustration.

Because we have been here for so long, we have familiarity with innumerable species of plants, and hope that when you come here you'll see stuff you've never seen before that will add interest to your yard.

We sell the same sod used in Yankee stadium, grown by the same company. It's the best sod we can get, and we keep it in stock all year long. If it doesn't sell right away, we roll it out so it doesn't go bad. When it sells, we just roll it back up. That sounds like a LOT of work, and it is, but doing all that work ensures nice fresh bluegrass sod is available all the time.

We try to suggest to people to try to minimize or eliminate the use of almost all pesticides on residential property, feeling that lawn chemicals do as much or more damage to our ecosystem as coal burning power plants, with lawn being the number one biggest culprit. Between fertilizers, insecticides, fungicides, irrigation water, lawn mower exhaust (and noise), the burden on our environment is immense. In September of 2022, we killed the lawn in front of the nursery and installed a wildflower meadow, hoping that it will be a beautiful roadside attraction for motorists and wildlife alike. Once established, we will mow it just once a year. Until its established, fingers are crossed that it doesn't look like a weedy mess. 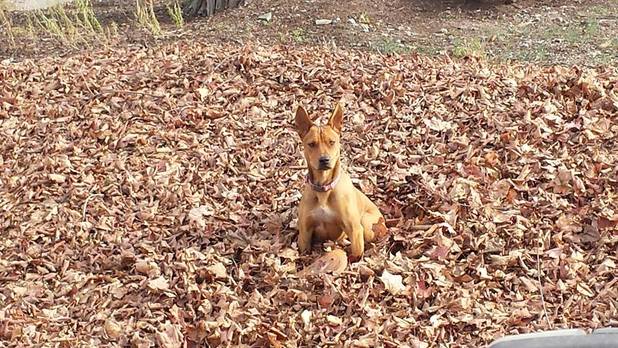 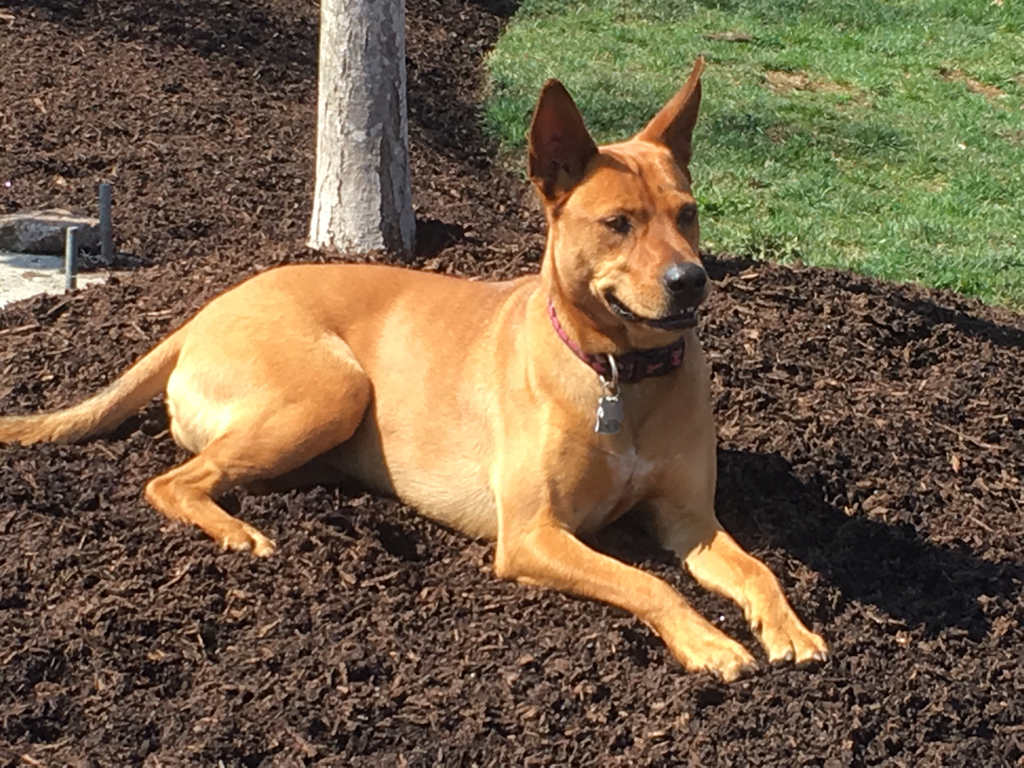 Best of breed, best of show at the nursery dog show, a fictional event. 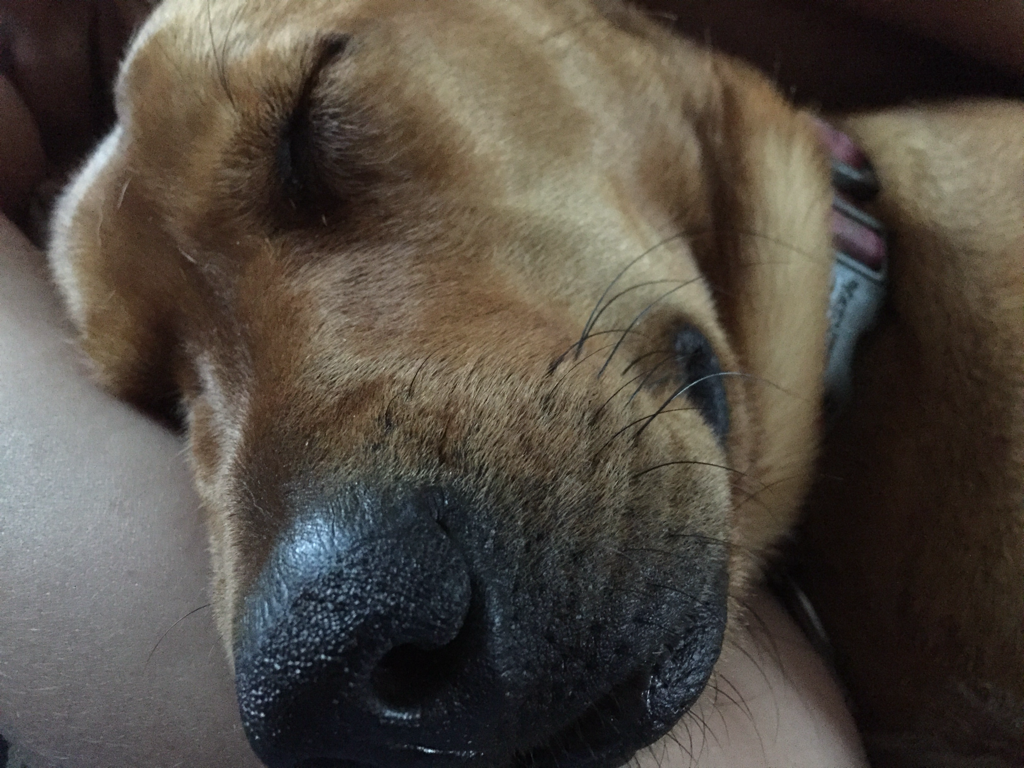 A sleeping Carolina dog keeping my kid comfy. She's a great store greeter
That's Peetee dog above frolicking on my irrigation/ice hockey pond a month or so after she smiled her way into our car.
When Lucy died (15 yo yellow lab) I asked two veterinary friends what kind of dog to get for long life and few medical problems...1/12,000 of a second later both replied “GET A MUTT," so mutt-hunting I went, and now there is a mangy critter running freely on our property- brings life and interest to our nursery. She is really cool looking. Many people asked what kind of dog she was so I took her to one of the vet-friends who took three gallons of blood with test coming back “basset hound!” Word... do not waste good money on those tests. They are all incomplete, Your dog is a dog, period, and which kind of dog they are is a good question yet irrelevant. When I was done shredding the $200 test results I found on the internet pictures of “American Dingo...” looked just like her-almost, so that’s what I say she is. She doesn't care what she is, and neither do I, all I know is this: from now on I will never again get a purebred... MUTTs ROCK!
She is named after the little Rascals dog, Petey. She is a rescue dog and we believe most of her genes are from the native Carolina dog/American dingo, a breed discovered surviving in packs in the Deep South woods. DNA test results showed 100% Siberian strains. This led scientists to surmise that this breed accompanied arctic wanderers into America when the glaciers melted 15,000 years ago. She is not purebred Carolina Dog," she is a mongrel, with spoonfuls of other breeds sprinkled in here and there. Her mom liked to party on the streets of some Virginia city and was picked up by the "Tails of Courage" rescue located in Danbury.

When I called Tails of Courage, I had reserved a Black Lab named Amy, said I'd be there in an hour, and by the time I got there they had sold Amy (was I PISSED?). My kid asked if he could pick up the squirming half breed- the only puppy left in the joint, and because I did not know the "puppy-pick-up-rule," I said yes. For those of you who do not know the "puppy-pick-up-rule," it states the following, and I quote directly from Wikipedia:

"Never ever allow a child to pick up, smell, hold, caress, or otherwise google and fawn over an unclaimed puppy less than eight weeks of age unless you are willing to own said dog for the rest of it's life, which could be as long as 12-16 years." It's a thing. Really. If you don't believe me, look it up for yourself.

If you are looking for an excellent companion and family member, try a rescue dog instead of buying a pure breed. It's hard to say she is the best dog I've ever had without hurting the memory of all the others (Heidi, Fritzie, Rusty, Hilda, Beedie, Hazel, Lucy), but that sentence has almost escaped my lips on a couple of occasions (sorry guys!).
As for my family history, rumors persisted in our family for years that my ancestors were among the first settlers in Newtown Connecticut, confirmed Winter 2018. The Sherman family (Samuel) bought one square mile from the Indians, and I’m sure he ripped the Indians off just like everyone else did.

​“Absolutely not, Squeaking Crow! One pewter belt buckle, take it or leave it!"

The Benjamin family lived in Stratford Ct. in 1632 and the Shermans also. The Benjamins shuffled off to Boston decades later and the Shermans were one of the first families to settle in Newtown Ct. and petition the "governor" for permission to charter the new colony. They were one of the seventeen founding families and I feel they had the very best property, right at the top of the hill next to the famous flagpole (currently located right smack in the center of the Rt. 25 for people to crash into occasionally).

What I find most uncanny is that neither of my parents were born in Connecticut. Dad is from upper state NY (Potsdam), and Mom was born in New Mexico. They moved to Newtown in 1976 and never knew the details of our family history while living here... what are the chances of that happening?

Additionally, I find it extremely uncanny that I have an agricultural business (that's what my ancestors did) 400 years later halfway between both towns when nobody from either family has lived here for years! Because the nursery is on the road that connects both towns, I am sure that the Shermans rode their horses past this property on their way to Newtown. Also, because there could not have been too many people in Stratford Ct in the 1630s, I am absolutely positive that the two families knew each other although I have no way to prove it. I wondered if they liked each other, were friends, or cared not for each other’s company...

"Hey Ebeneezer, top of the day to you!"

“Go to hell, Sherman! Go straight to hell, and take that half-breed sway-backed horse you rode into town on with you!"

​Check out your family history if you haven't already. I bet history has a few surprises waiting for you.

Turns out that another ancestor of mine is "Thomas Knowleton," leader of the revolutionary army's defense against the British at the battle of Bunker Hill (actually Breed's Hill) who worked directly for George Washington then died during the Battle Of Harlem as the United State's first Army Ranger and first Intelligence officer. He is buried in an unmarked grave in Harlem somewhere under a skyscraper I bet.

I bet Thomas Knowleton would roll over in his grave if he knew that the country he died fighting to create had devolved into such governmental dysfunction. 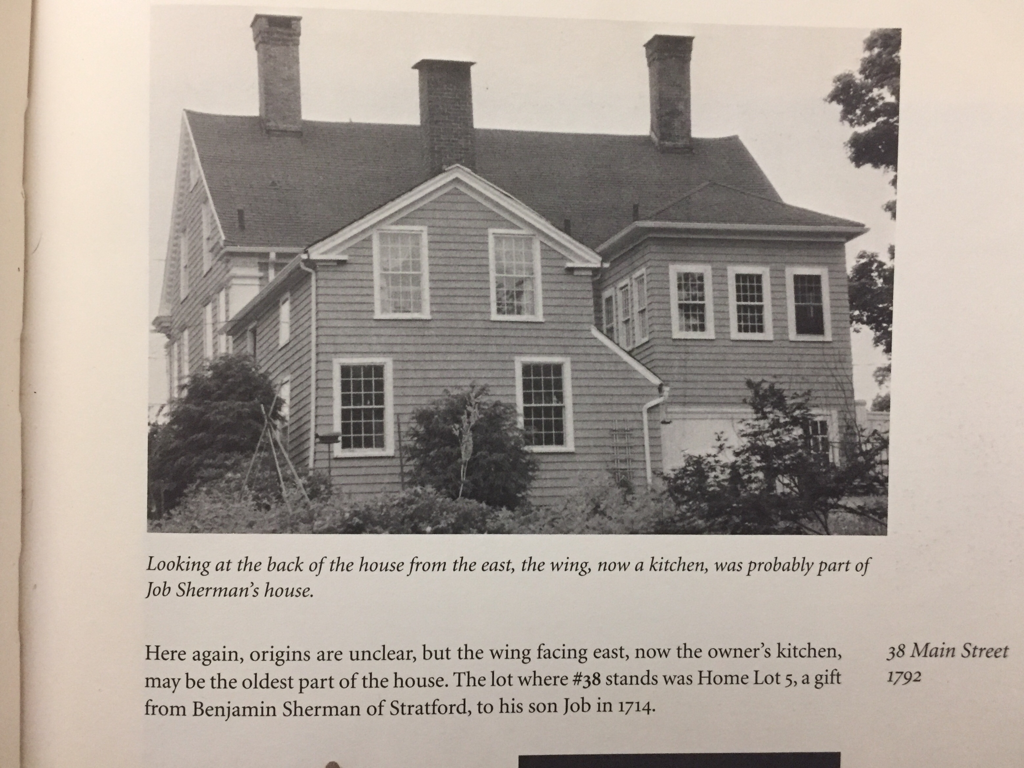 This house is across the street from the flagpole and the main church in Newtown. It was built by the Shermans and lived in for generations. The rear of this house was occupied by slaves. It is unclear if the slaves were Indians or "African Americans," but it certainly is a stain on my visualizations of my family's history. 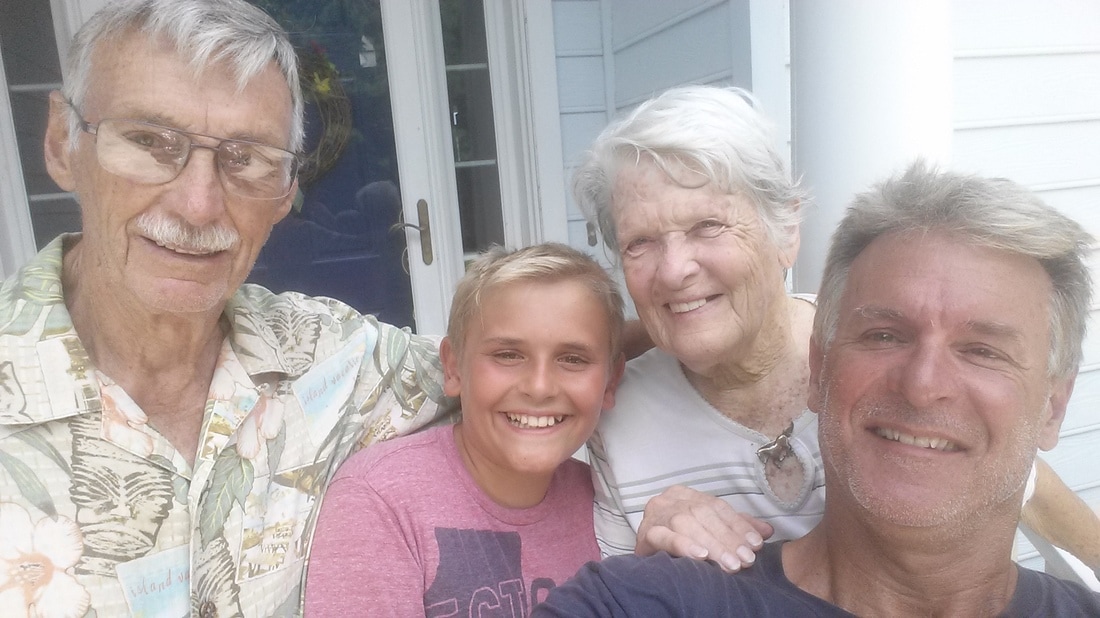 Stan Benjamin on left died November 10, 2020. Sarah lives in Southport, NC, They toiled for three decades at the nursery. Then there's me, at the end of my fifth decade.
Sarah and Stan Benjamin bought the nursery from John and Charlie Wakeman with everyone chipping in to make the nursery operate smoothly. Stan ran the garden center and the office, Sarah ran the flower shop, and I ran the nursery/ landscaping, Caroline worked in the garden center and flower shop. Sarah Benjamin worked really hard to please people with anything and everything they needed help with, an inspiration to all in the customer service business.